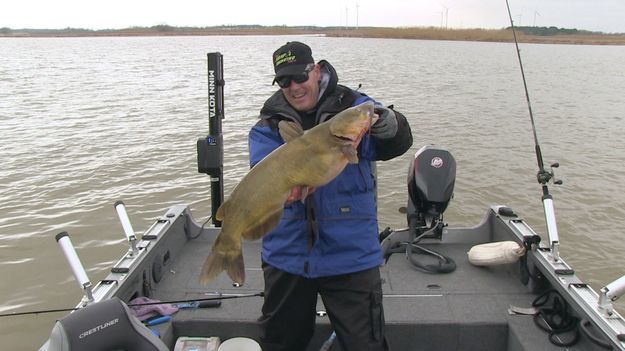 Today the Mercury Marine Destination starts us on Lake Ontario near St. Catharines, then over to the Grand River near Dunnville.

First, early season Salmon can be tough at times, but slight variations with time tested favourites can make the difference when the fish get a little boat shy.  Side imaging can help you see what you have been missing and keep you in the action when others can’t see the whole picture!

Then, its over to the Grand River for some fun with Channel Catfish.  Helpful additions to your boat can make things easier, and with only a handful of tackle needed, this fishery can be enjoyed by all.

Technique:  Salmon – Trolling spoons deep for early season Salmon with Hot Spot Agitator attractors.  While many target the shallows early in the year, there is a bounty of undisturbed deep water Salmon available.  Clear waters call for long leads away from the boat and running an Agitator in-line with Northern King spoons 6 feet back have been a very productive method.  One side 30 or 40 feet back, the other side 50 or 60 feet back.  The thinking for offsetting them, is if one side only attracts them, the lingering second spoon gives them a second chance to change their minds and hit.  You will see this pattern go back and forth all day long as the aggression and feeding level change. Daiwa line counter reels make this so much easier.

Many times you will have the fish all to yourselves while the boat traffic along shore is spooking shallow water fish.  Often those same shallow fish will charge directly out for the protection of the depths quicker than you can imagine and start feeding again.  Fishing deep with downriggers can be fun, and it is even more enjoyable with the Cannon stop at waterline feature.  Hit the up button and it will stop at the waterline all by itself allowing you to concentrate on fighting the fish.

Channel Catfish – Circle hooks fished on the bottom with egg sinkers. A length of 80 lb test Seaguar fluorocarbon is used to protect the abrasion from the sliding egg sinker.  Lead weights sliding back and forth against braided lines will weaken it quickly, but braid overall is so much better for sensitivity, also as the main line and leader.  Soft braided line makes for a better leader since the Catfish can’t feel the braid when they suck in the bait, harder mono or fluorocarbon is much easier detected. While it would be easier to simply use either braid or Fluorocarbon for the entire rig, it just works better with braid as the main line and leader, with Seaguar Fluorocarbon as the tough section for the sliding sinker. A 2-foot length is used for the egg sinker to slide back and forth allowing a slip sinker action so the Catfish can’t detect the weight while taking in the bait. A plastic bead and swivel on both ends make connection easy and the bead takes the beating from the lead sinker so the knot on the swivel doesn’t.  An 18-inch leader to the hook with braid is plenty, and the faster the current, the shorter the leader. The same 50 lb Seaguar braid used as the main line is the same for the leader.

Circle hooks are designed so a soft mouthed fish can take in the bait, even deeply, and with only steady pressure.  The Mustad circle hook slides back up, turns, and only hooks the corner of the mouth preventing deep hooking and damage caused by hooking deeper in the throat.   This makes for very healthy releases.  Setting the hook like you would with a “J” style hook, will only cause the circle hook to shoot straight out. A steady pressure is all that is needed and often it is best to just reel into the fish until solid weight is felt.  Only then can you apply normal pressure and fight the fish as usual. A downrigger action rod is perfect to allow the Catfish to take the bait and load up the rod letting the circle hook do what it is designed to do.  Often times if you are not paying attention, the rod will load up and set the hook itself.  Anchoring your boat and swinging in the current and wind can be annoying and unsuccessful since you are always pulling and moving the baits around.  The Minn Kota Talon anchoring system is one of the best investments you can make to help your boat control.  A telescopic pole shoots down from the Talon and holds you into rock, mud or weeds. The Talon is now available in a 15 ft version.