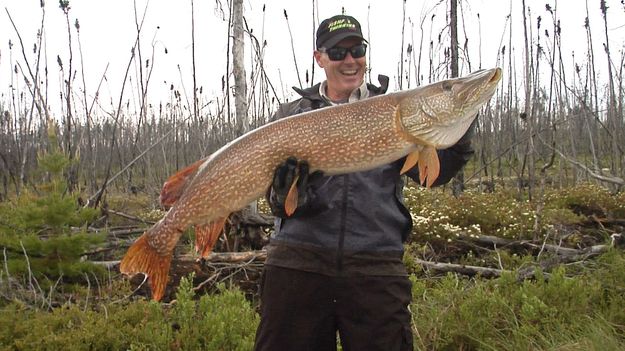 Today, the Mercury Marine Destination takes us to Cree lake in Northern Saskatchewan.

This is truly land of the giants and a much-anticipated annual trip for Charlie to Cree Lake Lodge.  Fly-in fishing trips to the far North are always fun, but experienced guides, and paying attention to even the slightest detail can turn great fishing into fantastic fishing!  When you find the magic ticket you better be ready with quality equipment; these can be true heavy weights!!  Even fishing in Pike Paradise can get better when you adjust to the conditions.  Hang on tight!

Technique: Swim baits and Freedom Hydra jig heads for giant Pike. The Freedom heads have proven themselves as one of the absolute best lures for these monster Pike. Since the hook is not locked into the lead head, but instead attached by a unique twisted wire loop, that also allows you to change hooks as needed for different situations or even to replace a damaged hook, the loop gives absolute freedom and a life like look to the swim baits.  Watching the action in the water, the Freedom heads have an independent swimming/rolling action, and the plastic X-Zone Swammer has it’s own swimming action since the hook has freedom of movement on the jig heads wire loop.  From even the first time testing the Freedom jig head, it was obvious the action was special, as the fish almost always targeted the rolling Freedom head.  The Freedom Hydra has the line tie on top of the head, the Freedom Stealth has the line tie on the nose and allows it to slink through the thickest vegetation and snags without hanging up. A perfect 1-2 punch for specific applications. With the ability to easily change hooks on the Freedom, a Mustad 6/0 Big Mouth Tube hook is used for a little extra strength with these giants. Once a hook is damaged or in this case with numerous Pike….simply worn out. In seconds a new Mustad is looped on and fishing continues, a great time saver and no time is wasted to re-tie.

While there are many leader types on the market with wire being the most common, 130 lb Seaguar Fluorocarbon has quickly become the choice of the more experienced angler for many applications. Virtually invisible in the water, the Seaguar has almost the same refraction index as water.  Out of the water it might simply look like mono, but in the water, it almost looks like the water and is virtually invisible, even the 130 lb test. It may be thicker than wire, but it is still less visible in the water. The thicker diameter actually adds many advantages.  The angler can grab the leader without risk of being cut up like wire would, it doesn’t kink and break like wire does.  And a huge plus for the fish, when they roll in the leader, it doesn’t dig into and cut up the fish like a thinner wire would. The 130 lb test Seaguar Abrazx is truly ideal for Muskie and Pike fishing.