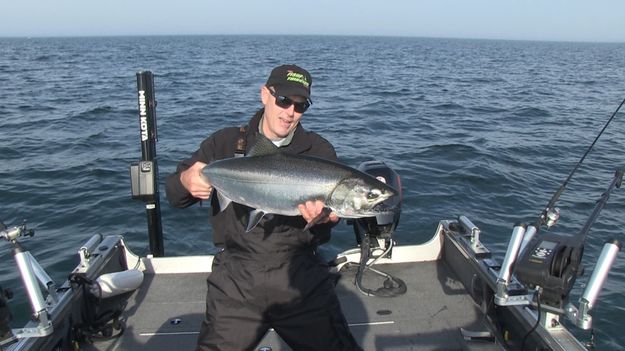 The Mercury Marine Destination starts on Lake Ontario just out from the Niagara Area.  Early season Salmon are the target today, and with a load of lure choices, this one might really grab your attention.  No messy Herring but the exact same action, and it doesn’t take long to show it works!  Then, Charlie takes the RAM for a drive to the Ottawa river and spends a day with John Anderson of the Ottawa River Musky Factory.  Not only do they have a fun day of fishing, but an update on a method that can save fish no matter what species you are fishing for.

Technique: Salmon – Salmon love that enticing cut bait roll. The largest problems with real Herring cut bait, is it is often hard to get, messy, very speed sensitive, and if it slips from the ideal roll or gets hit without being noticed, you can be trolling for long periods of time with an unproductive or damaged lure. A lure that is designed for Salmon, and to imitate the perfect look and roll of cut bait, is the new Freedom Herring.  Same perfect roll as cut bait, tremendous colour choices and works at a wider range of trolling speeds.  The Freedom Herring has that perfect rolling action, works at a wide range of speeds, and is made from a very hard plastic. It can stay fishing no matter if it was bumped or grabbed and has proven basically indestructible, even after dozens and dozens of big fish. Daiwa line counter reels are idea to repeat the exact amount of line out that has been working.  If you have never invested in a line counter reel before, it makes a huge difference.

Technique:  Muskie – Casting Muskie Factory double bladed inline spinners for Ottawa River Muskie.  Boat control in rivers with strong currents can be deceiving. If you spend long hours and days fighting currents, it might be time to consider a 36 volt Minn Kota Terrova with 112 pounds of thrust to enjoy your day to the very end.

Special Thanks: PLACE 1967 in Plantagenet, Ontario